I totally missed Monday and Tuesday was taken up by a migraine and housecleaning.  Throw holidays and crowded everywhere into the mix and it’s all yikes!

So anyway to the writing news…Chapter three of Undesirable is finally done.  In all seriousness, giving birth took less time and was less painful.  Saying there’s no way four could be as difficult to write would be inviting trouble for a visit.

I have all sorts of theories as to why three was a problem child.  My main theory is my converting the prior work to enhanced work.  The first draft of Undesirable covered the first third of the Oregon Trail, something Undeniable already did.  Not wanting Undeniable to be 900 pages long, I ended the story after the first third, letting Nick and Beth having their implied happily ever after (HEA).  Then, Undesirable could be Sam and Marie’s story, taking place over the middle third of the Trail. What did this mean?  I had to go in and take out their meeting, make sure key scenes happened at the landmarks they needed to happen at, and tell the reader the characters’ backstories without sounding goofy, as in:

Sam: Hi, Marie.  I see you brought that saloon gal’s dress you bought in New Orleans where you used to live.

Marie: Hi, Sam.  I sure did.  You’ve not seen it before because I kept it in my wagon until now from Independence, MO to here at Fort Laramie.  I suppose you could have seen it at Fort Kearny, but I had reasons to not wait to interest my husband, who is older than me, in, um, me.

It’s called exposition and I really try not to use it a lot.  I also tend to laugh when other writers use it, not in a bad way, just in a “Ooh, Chulo, you did a cop out right there!” Sometimes, there’s just no other way to get the info in there so the reader isn’t wondering what the heck???  I can’t think of anything I’ve read in the past couple of years that stood out as excessive, so everyone is doing good. 🙂

In case anyone is curious, Uncivilized finishes up the trail with Ellen and Del’s story.  Although Del is delicious, I’m not sure I want to keep that as his name.  We’ll see.  It’s too close to Dag, and I think we’re all disappointed with where he ended up so far.  No spoilers, you’ll have to read Undeniable for yourself. 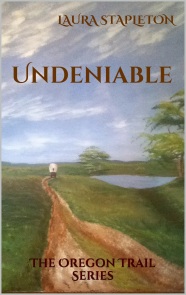