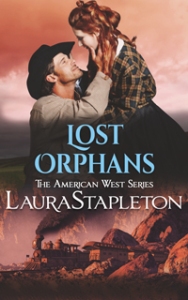 When Harry Donovan became an adoption agent for the Orphan Train children, he’d been more accustomed to prosecuting criminals. The orphans depended on him, and he took his new duties seriously. But when his wife, Polly, died in a flu outbreak, he ignored everything except work, until his irresponsibility stared him in the face. Two children Harry had placed with a couple were in the dry goods store without their parents, and shamefully, Harry didn’t know why for sure. The two seemed to be happy and well-fed, and their lovely guardian appeared to care for them.

Mollie Nelson had been helping the adopted children keep a terrible secret about their new parents, the Robinsons. Like Harry, she’d lost her spouse to illness. Caring for the two youngsters orphaned a second time kept her too busy to grieve. Her farm and the children’s needed her attention night and day. She wanted to confide in the handsome adoption agent, but his stern demeanor scared the children when they imagined the new home he might find for them.

Now that the adoption agent is asking questions of the children and their secret guardian, will they be able to continue living with Mollie, or will Harry place them in an unknown new home? Can either guardian or agent ignore the blossoming love between them and do what’s best for the children?